When rebuilding starters, the brake system is one of the key elements to making the unit last. However, it is also one of the most neglected parts of the rebuilt starter.

I have tried to find out from Delco if there is any published information on the rundown time after bench testing a starter and there doesn’t seem to be any information available.

In the 1960s Delco addressed this breaking issue on their 10MT starters by installing a spring on the armature behind the drive assembly. This spring served two functions. First, forcing the armature against the commutator end cap, reducing the coasting time, Second, it also helped the solenoid engage the drive assembly. This is why prior to 1972, most vehicles had 14-gauge wire to the switch terminal of the solenoid. After 1971/1972 we began seeing a 10-gauge wire and the armature drive spring was also removed. Without the armature spring the starter had a longer run down time, causing faster brush wear, shift lever wear and no help to the solenoid to engage the starter drive. 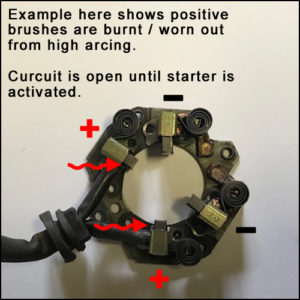 Denso, Hitachi, Bosch use a ‘c’ clip or ‘e’ clip on the commutator end to control horizontal armature movement. Allowing faster breaking. which reduced brush wear and shift lever wear, before the design of PMGR  (permanet magnet gear reduction) starters. Delco addressed this issue in the SD210 and 260 series starters by using plastic shift lever forks, better brush systems and stronger brush springs. The gear reduction starters are lasting a long time because of almost no run down time, this allowing for hardly any brush wear. It is important to know the difference between OSGR (offset gear reduction) field coil type starters and PMGR starters. The OSGR starters have a longer brush life than the PMGR starters, because as the starter is used, a portion of the current is absorbed through the field coils before it makes it to the positive brush, reducing the arcing of the positive brush. With the PMGR starters the magnets hold the field current all the time. So when the starter is used the current travels straight to the positive brushes allowing for a substantial arcing between the commutator and brush before the starter turns, causing a shorter brush life than the OSGR field coil type starter.

Vic Bunn
22:45 16 Mar 21
I called HEI looking for a starter spring for my 1942 IH TD-14 crawler. They didn't have one but Larry had one made for me. It is stiffer than the original spring and works fine.

francis solano
01:20 13 Jan 21
This is such a great place! Wounderful helpful people!

Mark Borntrager
22:45 29 Nov 20
I have used HEI to check or rebuild all my generator's, alternator's and starters for 50 years! Trucks, cars, tractors, RV's or my snake river boat HEI checks them all! Until recently that was all I used them for. Then Larry introduced me to an oil product called IXL. I was a lube tech in industry with mechanical apprentice and have been to many continuation ed. classes on oil. I'm very aware of the so called "Miracle Products" available that fix everything. I remember thinking, "whatever" when Larry asked me to try the oil and give a review if I liked it.I have a Pacific Energy fireplace insert and the blower motor quit working. It "wouldn't turn" and of course when I tried to order a new electric motor I was told it was no longer available so I vacuumed all the lint and dust out of the windings. That's when I noticed oil ports to the bushings. I put a drop of IXL in each bushing port and slowly began by force turning the fan/motor housing for a few minutes then added another drop of oil. After 30 minutes of slow turning by hand it began to loosen and turn freely. I reinstalled the blower, started a fire and waited for the heat sensor to heat up and turn on the fan. It's been run for a week now and even running quieter.IXL is going in the next oil change on the 2003 Ford 7.3 diesel. The 7.3's have an injector issue called "Stickion". I like what IXL does for a frozen electric motor! Lets see what it will do for my ol ford!Honesty, Integrity, Sound Advice and Great Service is what you get everyday at Hagemeister's! Thank you, Larry, Helen and Luke!

S&F Scenarios Paintball and Airsoft Field
01:25 24 Oct 20
Great locally owned small business really goes above and beyond for their customers. I've been using them since I could drive-in work on vehicles and they have done nothing but help me with bunch of different projects.

Katherine Bateman
19:48 02 Oct 20
I know next to nothing about cars. I was recommended to HEI after getting a battery replaced and finding out the clamp on one of the battery terminals wouldn't tighten enough. HEI was able to look at my car same day, and even better were able to fix it same day at a very reasonable price. I was able to watch the repair and they explained exactly what they were doing as they did it. I highly recommend them.

Justin Dodge
18:10 25 Mar 20
Took my boat out on the lake and couldn't get it to start, pulled it out of the water and drove it to town and stopped by their shop. They didn't hesitate to stop what they had been doing to take my starter out (which was in a terrible location), test the starter and get a new one installed at a great price and even better customer service. We got back on the water that day. Top notch customer service and I wouldn't take my vehicles anywhere else.

Dylan Shaughnessy
00:45 09 Jan 20
Great place to have in Lebanon. Did a starter repair in a 97 4Runner and they had the contacts and plunger in stock. Everything fit perfectly, and were OEM Denso parts for a very reasonable price. They specialize in starters, alternators, and batteries apparently. Also had a nice selection of stranded wire up to a very large "00". The staff was nice and very helpful. Highly recommend this place for auto electrical and then some.

David Gonzalez
22:37 13 Aug 19
Amazing customer service experience. Had an issue that needed to be resolved in a timely manner and results were magnificent. Definitely recommend to all.

Kim Adams
16:40 15 Jan 19
Very helpful and answered my questions when I popped in with a minor issue/concern. Definitely recommend them.

Dave Gearhart
01:20 11 Jan 19
I have been dealing with Larry Hagemeister and his team since the early 1990's and as an equipment mechanic, I will go nowhere else. Most of us strive for quality parts, knowledge and support. This is exactly what you get here. In fact, so much so that they have taught and given seminars over years at many events. Even the most seasoned mechanic runs into a puzzling situation from time to time and the team at Hagemeister is a phone call away with a solution. This is a major thing that most box stores and parts stores are missing. The folks at Hagemeister will fix you up. :)

Greg Palmer
05:25 26 Dec 18
They recently helped me replace the motor on a 12 volt mini-forklift. My impression was that they thought it was easy, but I had been turned away from two shops in Eugene that thought it was too unusual. Now running great.

Scott Howell
23:45 09 Jul 18
Alternator stopped working while driving my 2013 Volkswagen GLI 2.0T from Sacramento, CA to Albany, OR. My choices were take a chance with a mail order part that would cost up to $400 that may or may not fit or work, or work with someone that actually knew the technology behind the new computer controlled alternator, and could test and repair it. In about an hour Larry Hagemeister at HEI fixed my existing alternator, that was already paired with my car's computer. The cost? Less than 1/4 of the price for a mail order unit. Thank you HEI for saving my vacation!

Mike Bills
12:50 10 May 18
These people are great. I have a 630 JD and needed a starter. Well, we had some problems, but Larry worked with me (0ver 50 emails, photos & you tubes) to get the problem resolved. Very polite and went way out of their way to help me get my tractor running again. I can't thank them enough. Best customer service every.

Aj Wittrig
01:25 17 Apr 18
Great service! I was met with a smile and a genuine interest with my alternator issue.

Peggy Diegan
20:41 06 Apr 18
It is so refreshing to get to talk to a real live person & one that knows what you are asking. Ordered two different starter posts for a couple of older Ford starters. Larry knew exactly what I wanted & shipped them out the same da postage free & the price was very reasonable. My `parts arrived two days later and fit perfectly. I will definitely keep his phone number. I must mot forget the sweet lady 9on front desk that answered the phone either as she also knew where to transfer me to the right person. Thanks again H E IBob Diegan

thomas hayes
03:25 16 Mar 18
Great service always have what I need or are able to fix what I got great business I will definitely continue to go to them

Jeannette Knower
00:22 09 Mar 18
Larry and staff rescued and revived my old Dodge Truck - he's back on the road - making us all happy! Thanks for finding and installing what was needed!

Bill Hunt
00:05 09 Mar 18
My experience has been that very knowledgeable and competent people work there. Larry has rebuilt electrical parts for my commercial salmon boat, has offered invaluable advice on golf cart batteries, has sold me excellent RV batteries, plus several top quality meters and testers for battery maintenance tasks. Also, Helen is a personable, efficient helper. Whenever I need a job done right, or to purchase high quality parts, I go to Hagemeister.
See all reviewsWrite a review

Edwin Eby
23:43 20 Mar 18
I went in to their shop today for a starter and alternator for my 99 dodge Cummins and they were very helpful and knowledgeable. They showed me the one wire alternator for the dodge that they carry and I tell you right now it's worth every penny you'll spend it completely fixes all the charging problems these trucks are know for having. I highly recommend these guys for all of your auto and equipment electrical needs.

Jake Winn
04:33 06 Feb 14
These guys are the best. Very knowledgeable and willing to help.
See all reviewsWrite a review
powered by Facebook
Yelp Rating
5.0

Joseph H.
17:22 03 Jan 20
If you're in need of an alternator for your 5.9 Cummins diesel engine this is the place that sells what you need.
See all reviewsWrite a review
powered by